The ADCS is divided into 4 modules. It is important to note that the ADCS system is currently based on a preliminary design and is subject to changes. The objectives of each module are depicted in the following list: 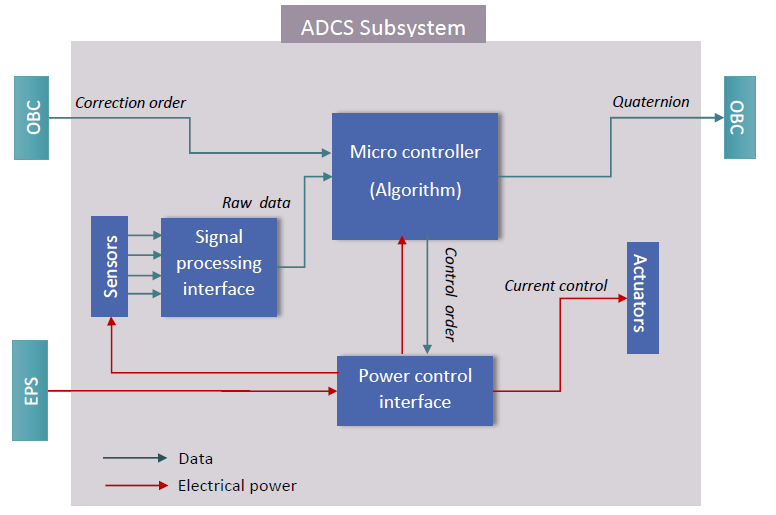 The actuators goal is to position the CubeSat in the target attitude by rotation it around 3 axes: Yaw / Pitch / Roll. So the Actuators System will be placed to have control over the 3 axes (X, Y, Z).

The ADCS Interface is the hardware part of ADCS which transmit the signal received from Sensors to the micro-controller and it also distributes power supply coming from the EPS subsystem to the Actuators.

State Of The Art

Aim: Get access to sensors and then perform attitude algorithm.

Those requirements concerns all the ADCS card, including the subsystems. Their are mainly here to assure the functioning of the module in the conditions it will face (temperature, magnetic field, radiations and void).

As actuator will be our way to move in space, we impose to them to reach our precision goal of 5° along each axis. We moreover impose a condition on the orientation of the Z face in order to accomplish our mission.

Sensors will be our primary source of information about our attitude. To do so, we impose to them a maximum time to give us the data. We also them to warn us if they are malfunctioning.

The controller will collect and process our data. That’s why we want the result of computation to be in our goal range (5°). CTRL have also to be able to determine the necessary correction in order to be able to send it to the OBC. Finally, the orders coming from the OBC have to be processed to individually power our actuators.

We decided to include the low level feasability study with our sizing in order to sum up our results. Our studies can then be placed into 2 categories

The ADCS mission is to get access to sensors for attitude determination and then apply correction through actuators.

We designed our decision taking algorithm to be as it follows : 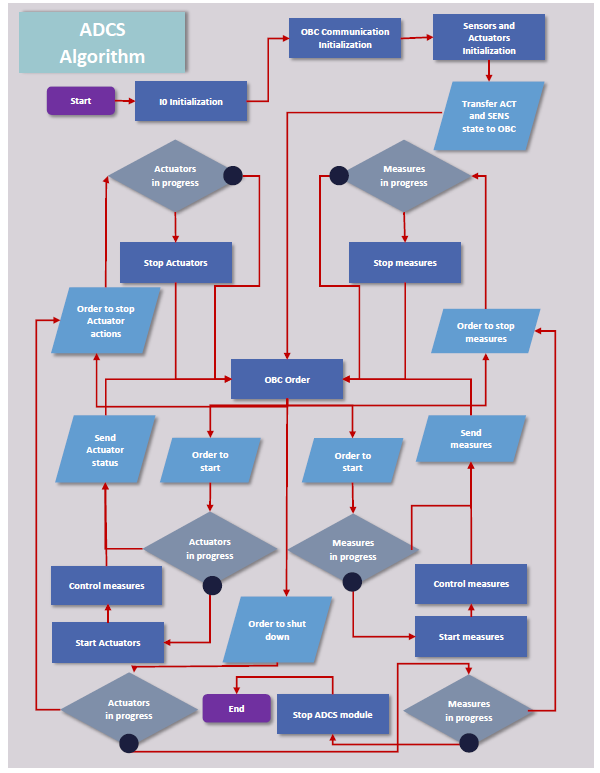 As we can see our algorithm begins with the initialization of our module (the IO, communication, sensors and actuators).Then a confirmation of well-functioning is sent to the OBC.

That’s where we reach the central loop. The OBC can give us several order which can be classified as follow:

The goal is to decrease the kinetic energy of the system, which means stabilize the satellite.

In order to do that we need to use the properties of our actuators: when the magnetorquers are supplied correctly, they can generate a torque of equation T = m ^ B (m being the magnetic moment of the dipole and B the earth magnetic field). That means the satellite, which is totally linked with them will have the tendancy to align itself with the Earth magnetic field. The principle is the following:

The torque created by the coils is calculated by: T = iS n ^ B With I the intensity of current in A, S the surface of a spire in m², n the normal vector to this surface and B the magetic field (here earth).

In our case every element here are fixed except the intensity so using a positive or negative intensity will determine the rotation direction. We can also see that the torque being the result of a cross product, the magnetic moment will only create a torque if he is coplanar to the B vector (at least one component of it).

The Bdot algorithm itself work as follow: when the satellite is moving so that the Y axis is moving toward the earth magnetic field, the temporal derivative of B will be positive. We use our magnetorquers to generate a torque opposed to the rotation (negative intensity here to have a magnetic moment oriented toward Y-). We then reverse the dipole orientation (so I positive) when Y passes B, that is to say B° negative.

To sum up the way the Bdot algorithm work: 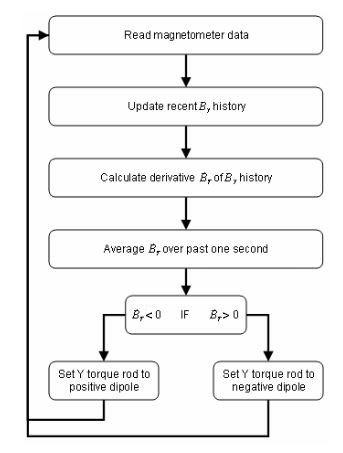 Therefore, the control law applies a magnetic dipole in the opposite direction to the change in the magnetic field (estimated with magnetometers data). The magnetorquers applies a torque following this equation:

As we can see the BDOT algorithm is a simple stabilization algorithm, only knowing the evolution of the magnetic field allow us to take the right decision to stop the rotation of our CubeSat.